I recently wrote an essay titled Knowledge as an API, where I explored the idea of thinking about knowledge as a collection of APIs. In the essay, I define the term Knowledge API as:

"A mental model for thinking about the understanding of a specific domain as an Application Programming Interface (API). Knowledge APIs depend on and can be used by one another.

One of the talking points of the essay was the importance of trust between knowledge APIs, and how an error in a knowledge API (where error means producing an unexpected result) introduces incorrect behaviour to the system. This incorrect behaviour then propagates to all knowledge APIs that use that API. Using an analogy to software, the type of error I am talking about here is a "logic error", where the program does not crash, everything appears to be working, but the results are not what we expect. Similar to software development, the root cause of incorrect behaviour becomes more difficult to identify the further you get from the source. Unlike software development, we do not have a stack trace or debugger to help us determine the root cause of the incorrectness in our Knowledge API. Why do we need trust at all? Why can't we just verify the correctness of our knowledge API and all its dependencies before using it? I will explore the answer to this question in this essay, along with how incorrect knowledge APIs and the concept of error propagation translates to subjective domains like economics, and how you can use this mental model to better evaluate the validity of subjective domains.

Let's start by looking at how errors propagate among knowledge APIs.

Suppose we have a knowledge API called Arithmetic:

For example, say we have a Geometry API that utilizes the Arithmetic API's addition and multiplication functions:

The effects of incorrect knowledge API's are especially destructive when the root cause of the incorrectness exists within a widely used and reputable source. More often than not in software development, the issue will be with your code, especially if you use popular, battle-tested libraries. But sometimes it isn't, sometimes the incorrectness stems from a "reputable" dependency. What do you do in this scenario? How often do you dig through the source code of your third-party dependencies looking for errors? and If you do, how often do you feel comfortable doing so?

Trust is essential for building knowledge. Geometry does not work without trusting that arithmetic is correct. If one day 2 + 2 equals 5, all hell breaks loose.

Depiction of hell by anonymous painter, 1520

Why do we need trust? 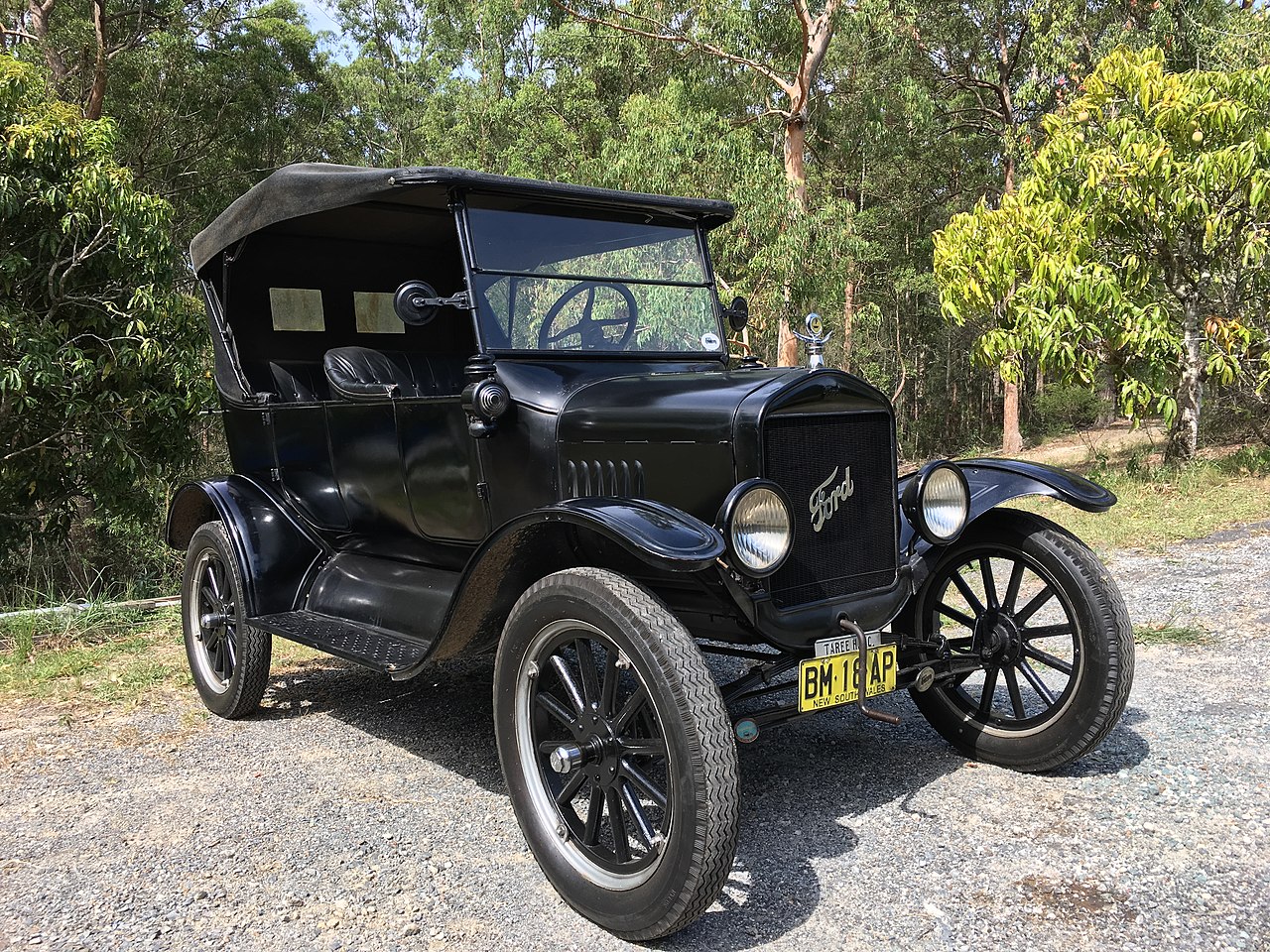 Ford Model T, first automobile made from an assembly line

So why do we need trust? The answer is time. Why does Geometry need to trust Arithmetic? Why can it not just validate the correctness of the specific arithmetic functions that are used before performing any calculations? Time. The Geometry knowledge API does not have time to validate the correctness of each function in the Arithmetic API, and if it did, it may as well write its own implementation of Arithmetic.

Consider the analogy to modern web development: as of the time of writing this post, a newly generated react app has 1932 dependencies.

Validating the correctness of each of these dependencies would take a lifetime, by which we may no longer even use web applications as everyone just downloads content directly to their limbic system using the newest Neuralink device. Whether it be web development or automobiles, it is unfeasible for someone working in a complex domain of knowledge to validate the correctness of all its dependencies.

The greatest utility of knowledge APIs is the mental framework they provide for breaking down and analyzing the components of subjective domains. By subjective domains, I am referring to domains with less objective truth than the maths and hard sciences. Philosophy for example has little objective truth or "right answers". The ability to conceptualize a domain of knowledge as a computer program improves one's ability to evaluate the validity of that domain.

There are 3 main reasons for this:

I believe the above reasons are the strongest argument for why programming should be added to the core curriculum of schools. Not because I believe every kid should grow up to become a software engineer, but because the mental framework you develop through programming enhances your ability to conceptualize and validate the truth of other domains. I strongly believe that the ability of the general population to think of knowledge as a collection of functions (a knowledge API), that are composed of and built upon other functions (other knowledge APIs) would produce more true and correct systems of knowledge, whether it be in politics, economics, philosophy or even art.

Let's use everybody's favourite economic ideology as an example. Communism advocates for communal ownership of the means of production and an equal distribution of goods among members of society. Thinking about Communism as a program, we can immediately identify 2 of its dependencies, Human and Good. There are many types of goods, but a very simple one that we will use for our example is Food, since food is required by all Humans for survival. Basic implementations of Human and Food might look like this:

Communism needs to be able to distribute food equally to all Humans in society. The interface for this function would look like this:

This implementation works great, so long as there is always enough food for all of the humans. However, if we think back to the attributes of our Human class, we notice that not all Humans are equal, in fact they may differ significantly in their primitive physical attributes such as weight and height. Using this observation, while also importing the knowledge API of Nutrition, we identify a flaw in the proposed implementation: different humans have different physical attributes, which requires them to have different amounts of food. Humans with a larger height and weight need more food to maintain their body mass. With this insight, we amend our implementation of both Human and distributeFoodSupply:

Shortly after this amendment, we realize that we actually need someone to distribute the food to the humans, it does not just magically appear amongst the population. Who distributes the food to the humans? How is this person or persons selected? "Geez, the implementation of this communism thing is not as trivial as I thought" we say to ourselves. Nevertheless, we carry on and decide that we will just select a human at random to be our distributor.

We have our food distributor now, chosen at random, but wait, can the distributor really be chosen at random? What is the Math.random()of the real world? Presumably, it is a human that we trust to make the random selection, and if our population is small enough, we could likely come to a consensus on the trusted distributor, but for larger populations, a consensus is unlikely. Let's make the favourable assumption that we somehow do make an unbiased and completely random choice in electing a food distributor. What is the likelihood that our distributor will be fair in his distribution of food amongst the population? How can we determine this likelihood? For this, we import the Knowledge APIs of History and Introspection.

Looking at History, we observe that the majority of civilizations were Monarchies with hereditary succession. Some might think this is pretty compelling evidence for concluding that Humans are likely to practice nepotism. We are not convinced, maybe nepotism is reserved for the ruling class. We cross-reference with our Introspection API, asking ourselves "Would I give my friends and family more food than strangers?" My Introspection API answers "Yes", as does yours.

I can continue with this example indefinitely, identifying a nearly infinite number of flaws with Communism. This exercise could be done with any and every economic ideology. It is up to us as autonomous, free-thinkers, to identify the flaws of any proposed ideology and the probability of those flaws causing problems.

The purpose of this example was to demonstrate the utility of the "Knowledge API" mental framework, and how it can be used to easily analyze the validity of subjective domains of knowledge. As it pertains to Economic Communism, we were able to quickly identify incorrect or missing assumptions around human nature, which seem to dismantle the entire ideology. Even from this short example, I am confident in asserting that economic communism, and its claim to be a functional structure for an economy, as false.

The third thing is what we want to avoid, and I hope that this essay (and my previous one) provides a mental framework for doing so. Few complex domains are valid under all parameters, but we must play the probabilities and optimize for the greatest amount of validity under the most likely parameters. Too often does civilization repeat failed experiments, or build upon broken ideas, especially in subjective domains. So next time you are learning about the latest and greatest technology/philosophy/diet, treat it like a computer program, identify its dependencies, break it down into components, test the validity of each component, and ask yourself if the way the components interact makes sense.